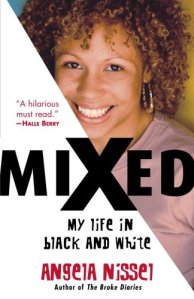 What: Witty and spirited account of Nissel’s mixed race experience from childhood through college, (and a trip to a psych hospital). Nissel alludes to the idea of the “tragic mulatto,” poking fun at it while she describes her quest for popularity in elementary school – having to choose one group of girls over another in segregated private schools.

Who: Angela Nissel is best known as a writer for the TV show Scrubs, and was honored in 2009 at the Mixed Roots Literary and Film Festival

View all posts by jamie-m